Been a few days since an update, but I've kept busy.  I've got a couple minor bug fixes for Silhouette to test and release, and around the same time will hopefully have my current project ready to go.  The next one's an aquarium!

This one's been interesting, as I've had to build and animate several fish -- which means a lot more time in Blender than I'd previously had.  I'm getting pretty competent at it, I think a new fish is maybe a two hour project now between the texture and the model, assuming I can find good source material.  That, in fact, has been the real problem.

While it's no big trick to find good photo source (public domain or otherwise royalty-free) for some things, apparently aquarium plants don't fall into that category.  The only pictures I ever find are from companies who, well, make and sell aquarium plants -- and I suspect they're not interested in my using their catalog images.  This is why there's only a couple of foreground plants in the initial release.  I'll add more later if I can find more decent photo source.

Currently the background has three wallpapers, three fish, and two foreground plants.  I'm intending to add at least another fish or two before release.  The settings activity has buttons that will refresh the number of fish/plants and which types -- you can play with them until you find a mixture you like, and it'll keep those settings.  You can also switch out the background image and turn on or off the overhead light! 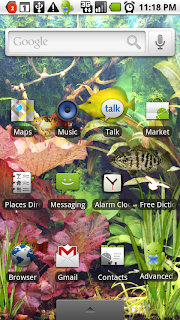