This one's been on deck for a while... and taught the lesson that low poly, good looking animated flowers are actually kind of hard. The basic concept was to give some motion to the classic low-angle macro-lens wildflower photo.  This more or less worked out, though it proved tough to come up with user settings for it, so there's only a couple available currently (flower color, background image).

This project is using three pieces of Creative Commons Commercial licensed photography.  Credit goes to hickoryrose, MorroBayChuck, and simonsun08 for that! 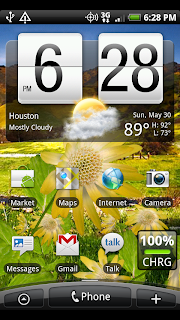 Posted by Jeremy Statz at 6:24 PM No comments:

One of the changes in v1.3 is the addition of a "Toys" button, that lets you switch between tank decorations.  To begin with, this included just a treasure chest.

Well, the pref wasn't quite working correctly, sometimes not showing up despite there being an object saved.  This has been fixed locally, and after a bit of testing I'll push an update out.  As a bonus, expect a cannon to get added to the list!
Posted by Jeremy Statz at 11:51 AM No comments:

I've gotten a few e-mails now indicating that the Donation version of my wallpapers don't show up in the live wallpapers list on a Nexus One running Froyo.  I'm struggling to work out what this is right now, but will hopefully get this fixed within a day or two...

EDIT:  Apparently I was mistaken, people's complaints are that the Donation versions aren't showing up on the Marketplace.  This, unfortunately, is typical when installing an unofficial build onto your handset -- anything copy-protected (which includes most paid stuff) won't be listed, presumably because they're worried you're going to hack it somehow.  Sorry folks, there's nothing I can do here.
Posted by Jeremy Statz at 7:57 PM No comments:

- New Feature: Tank Toys!  Just a treasure chest to start with, that list will grow.
- New Feature: Anemones!
- Update: Use of Log.v rather than System.out
- Update: Performance optimizations, GL1.1 support

There's a number of other small updates as well.  Fish are a bit faster, and occasionally hurry to their destination.  Background plant tinting's been adjusted.  A number of other things that noboby will notice.
Posted by Jeremy Statz at 7:54 PM No comments:

The last couple of days has primarily been spent on cleanup and optimization of the toolset I've been using for all my OpenGL work.  This includes some profiling work that resulted in a measurable speed increase for my interpolated animation code, a result I'm quite happy with overall.  The sum total so far:

A lot of people have asked for this to change with the time of day, and I finally got that in.  It IS a touch  more expensive, as it needs to blend between two layers to do so, but it doesn't seem to cause any problems in the Droid I've been testing with.  The tree graphics have been updated based on Creative Commons Commercial licensed content, many thanks to Mike__Lawrence and amandabhslater for making those images available for use as source material!

I updated my model and texture libraries the other day to make use of OpenGL 1.1 where available, meaning its built-in mipmap generation and Vertex Buffer Objects.  This makes a substantial difference in the case of Aquarium in particular (as there's a lot of models being rendered), and Silhouette is the first update I've done since the support went in.  It doesn't seem to have any problems thus far, I'm sure somebody will let me know if I'm wrong.  =)
Posted by Jeremy Statz at 9:08 PM No comments:

This is pretty much what it sounds like... double-tap and all the on-screen ladybugs will stop and do a silly ladybug dance!  When they're done, they'll resume their usual wandering.  In addition, I added a new background image of a stone floor that I came across on Mayang's, which looks pretty nice in my opinion.
Posted by Jeremy Statz at 4:44 PM No comments:

Thanks to a fellow named Joel Mejia, we've now got much nicer looking plant graphics!  They make worlds of difference in my opinion.  I also finally yanked the grey fish that everybody hated so much, and in place we get a red stripey fish of awesomeness.  I also added two more backgrounds that are simple flat white and flat black.  Some folks have requested these.

As a bonus, I now tilt fish to the appropriate inclination when they move to their destination as well, so they're not all uniformly level anymore.

This update makes use of Creative Commons material, credit goes to ThatPetPlace.
Posted by Jeremy Statz at 4:41 PM 1 comment:

The next update should see notably better foreground plants!  These are being worked on currently and will hopefully be good to go sometime over the weekend.  Meanwhile I've got a completely silly new wallpaper in progress, I'm still figuring out what options to give people, but with some luck I might get that releasable this weekend, too.
Posted by Jeremy Statz at 11:24 PM No comments:

Oddly enough, implementing home screen movement basically allowed me to unify portrait and landscape behavior... both use a wide area for the fish and background now, and the big difference is how much of it the viewport can see at once.  This means that landscape doesn't move much when swiping, but it simplifies a lot of things and avoids an image reload that was happening previously.

The How to Use screen has gotten a couple negative comments, but I can't deny I've seen a definite spike in purchases of the Donation version since I put it in.  This suggests to me that a lot more people are evaluating the Free version than there were previously.
Posted by Jeremy Statz at 9:17 AM No comments:

- Update: New background image
- New Feature: How to Use screen

This update is a bit of an experiment.  Basically, the free version of Silhouette has a runnable activity now.  This means that when you buy it from the marketplace, you get a "run" button.  Pushing it pops up a dialog that explains how to get to your Customize Wallpaper screen, which is where Live Wallpapers are used from.

This is in response to the huge collection of e-mails I've received asking how to make use of the wallpapers, and the number of 1-star comments I've seen saying they don't do anything.  While there's good logic attached to how Live Wallpapers currently work (within the Customize Wallpapers area), I've found that users very much expect to be presented with a "use this!" button right after download.  If it's not there, they assume it doesn't work.  Given that in my experience only a very small percentage of people report problems, this means there's got to be hundreds or thousands of people who have no idea how to make use of these things.

So, I'm hoping this makes some difference there.  Either that, or I'll just get a bunch hate mail for my condescending little popup.  We'll see. :P
Posted by Jeremy Statz at 11:08 AM No comments:

This is now live!  I don't know about you, but I have a fiance who absolutely adores ladybugs, so it seems to me  I should try catering to the ladybug-loving demographic.  To that end, you get three different backgrounds and six different ladybugs (two in the free version), and seven animated ladybugs exploring your home screen.  They play cute animations when they bump into each other, too!

This project made use of some Creative Commons Commercial licensed material.  Huge thanks goes to Jayhay312, JonyCunha, and Clearly Ambiguous for source material! 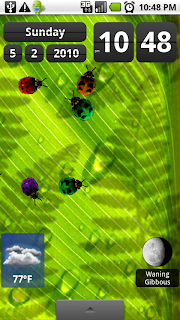 This is more or less ready to go, and should be uploaded tomorrow sometime.  The landscape mode change is relatively simple, but does mean that when you go from landscape back to portrait it might take them a bit to swim back into view.  They won't run away, don't worry!

The new background is a lower key fogged-out style that's on the less-busy end of things, and the new fish is a totally sweet blue tang.  These used Creative Commons Commercial licensed source material -- credit for the original source material and much thanks goes to d'n'c and nattu! 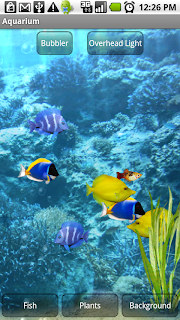 Posted by Jeremy Statz at 11:32 AM No comments: