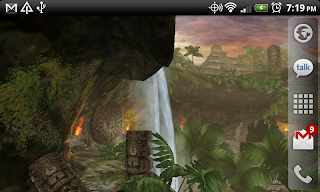 This one's been struggling while I attempted to work out the issues with the G2, but things finally cleared up the last few days, and the end result is really great!  This one's an entire jungle scene, with a waterfall streaming down the middle.  The trees and ferns all move, the fires are fiery, the fog turned out great, and there's mayan ruins scattered around to reinforce the Indiana Jones vibe.  Honestly, I think it turned out to be one of the best looking examples of OpenGL on Android around.

This one started as a roughed out scene in Blender, was passed on to Allyson Vaughn for finishing and texturing, then came back to me for all the scene setup, animation, and particle stuff.  Performance is quite good (despite the fog!) and can be made better if you want to disable the fog pass -- though I really think it looks much better with the fog on.  There's preferences for fog color and you can tweak the density, and you can disable the embers particle that's going on overhead.

The biggest issue with this concept, aside from the general scene complexity, is that it doesn't really lend itself to a deep set of preferences.  As a result this one's paid only I'm afraid, as I try to make sure the donation version gives substantially more than the free one, and I don't think I can differenciate this one enough.  No worries, the next one will have a free version. :)

The biggest technological challenge here was getting the sorting right and working out inexpensive ways to get everything animating.  That all turned out well, luckily, and I'm thrilled to be able to present the end result to folks!