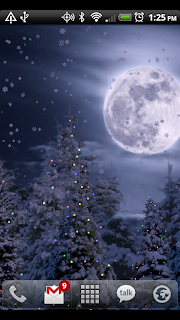 We've had a ton of requests for a winter-themed wallpaper, and as I personally hail from the great white north I'm not about to say no.  The result is Snowfall, a beautiful winter scene of snow covered pine trees, with snowflakes falling from above.

The particle system took a while, as performance with a ton of independently moving pieces was hurting at first.  Eventually I got it down to three instances of an effect with only 32 particles (if you set snowfall to the highest setting), though it looks like a whole lot more than that.  This kept performance up and worked out very well in practice.

Trees and the daytime sky were all made by Allyson Vaughn, who did very well at tolerating some back and forth feedback.  The nighttime sky ended up being based on the same moon that Halloween used, which I feel a bit guilty about, but it's really a great image, so what you do you?  Basically everything in the foreground animates, and we're once again using the visibility system to avoid rendering off-screen items.  The framerate's quite good on my Incredible, and works well on the Evo as well (as you can see from the YouTube video!).

There are a couple new things happening here.  Firstly, I'm taking another stab at making use of the 'Open' button on the Marketplace page.  This is basically a rework of the 'HowTo' activity I had set up for Aquarium and Silhouette for a while, though it has more depth now.  Basically, running the activity will still explain how to use a wallpaper, but now it will also provide a shortcut directly to the Live Wallpaper Chooser.  Additionally, the first time the user successfully runs the wallpaper, the HowTo activity will disappear -- that way it won't annoyingly clutter your app listing. 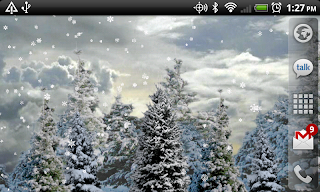 The other new thing is that up until December 15th we'll be giving 50% of the revenue from Snowfall to charity -- specifically Child's Play.  This is one of those things I've always wanted to do, and I can't think of a more appropriate product to do it with.  I'm excited to have this on the market and can't wait to see what people think.  :)
Posted by Jeremy Statz at 1:28 PM