Product Localization and the Results Thereof

After largely neglecting localization for most of our products, a while back I decided to go ahead and invest in it for some of the bigger sellers.  I've never been sure how much of a difference it would really make, and many times I've seen debates about how much difference it makes or how much it helps ratings or adoption.  It seemed like it would be nice to put some numbers on this, and we have some products big enough for these to be meaningful.  Now that it's done, I'm hoping to present those numbers here.

I'm not a statistics guy so bear with me.  I'm sure I have some terrible practices, no guarantees, etc etc.  First, some groundwork so readers understand the situation.

Regarding the products themselves: These products are a little unusual in that they're all live wallpapers, so as a whole are quite workable without knowing their native language -- this is part of the reason I've been putting this off so long.  Our business model with them is simple and very friendly, all told.  Our free versions run no advertising and we also do not burden them with a time limit or other intrusions.  Most of them have literally no permissions aside from being a wallpaper itself.

The big separating line between our paid and free versions is access to the settings screen.  The free version is stuck with the default settings, while the paid versions let you switch out backgrounds, adjust colors, turn things on and off, etc.  This is important because when running the free version, pressing the 'settings' button takes the user to a simple dialog explaining that they need the full version to access the settings, and one of the buttons leads them to the Play listing for the paid version.  We call this the upsell window, and this is the only user harassment we do.

The actual localization updates happened in two stages, the first one several months ago updated only the market descriptions.  The second one, a couple weeks ago, updated only the apps themselves (including the upsell window).  I gathered statistics for week-long period before the update event, and a week-long period after, but did not include the week of the update itself.  This is because updating the free versions of the app tends to remind people that they can buy it, so a spike happens in paid version downloads.  I didn't want to include that spike, as it's separate from whatever affect the localization had.

All numbers are using what Google calls "daily installs by user", which tracks the number of unique users who have installed the app for the first time that day.  Long run, this seemed like the value that matters.

I chose to invest in our five biggest selling products: Koi, Aquarium, Blue Skies, Thunderstorm, and Galactic Core.  We updated both the paid and free versions of each.

I've also included a handful of other products that had not been updated during these periods. The market as a whole tends to have a general trend, and I'm hoping this comparison can help isolate the effects of the localizations vs general Play activity changes. To some degree anyway.

The actual languages we translated to (from American English) are French, Italian, German, Spanish (Spain), Japanese, and Korean. Localizations were all handled by native speakers, at a cost of 9 cents per word. Total, the cost across all projects was around a thousand dollars.

The first update occurred on July 11th 2013, and was to the Play listing only.  This was the three user visible fields: Title, Description, and Promo Text.  We do not localize the change log. 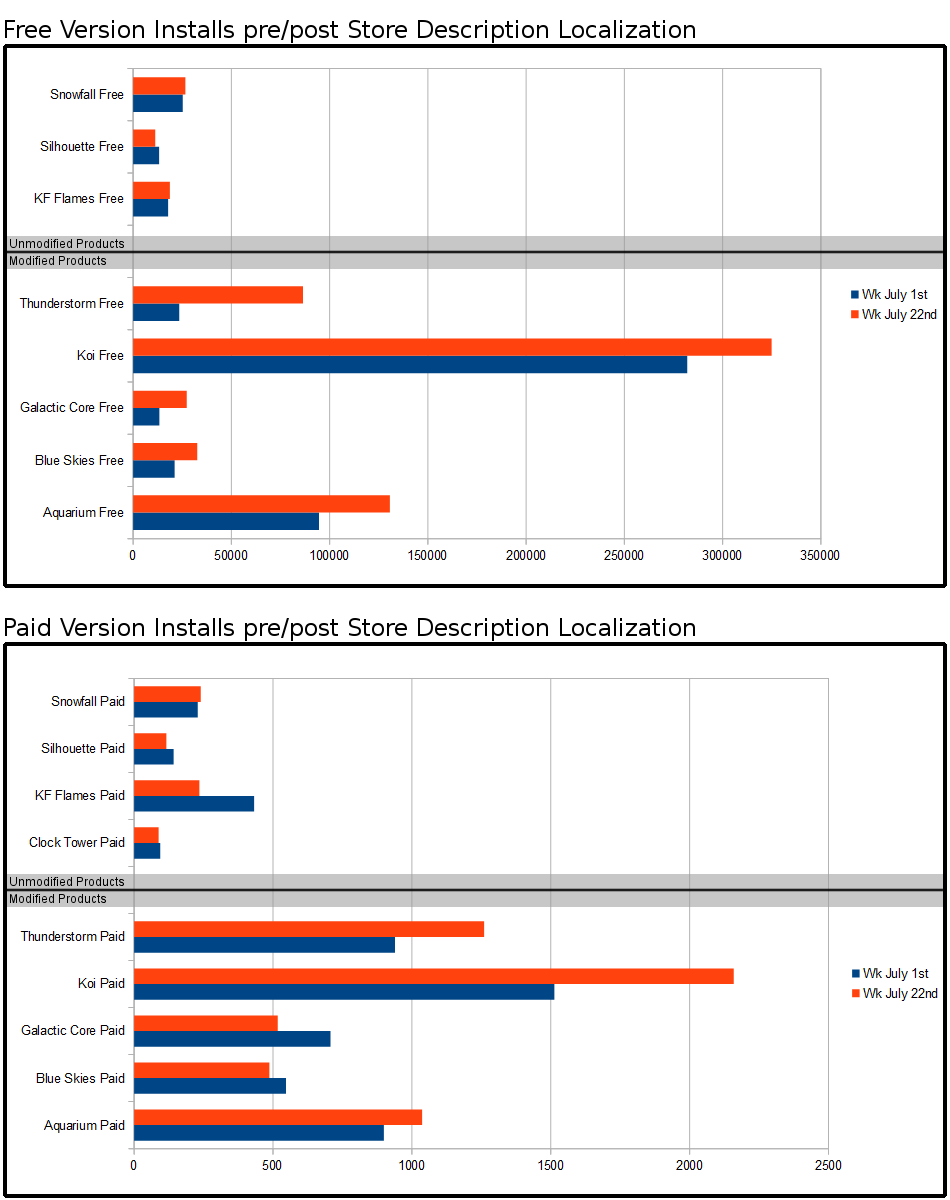 The results are at the right, showing total installs for a week prior to the update, and a week after.  Doing the math on the actual numbers, there's a substantially visible increase in downloads of the free products, and modest increases overall for the paid though not nearly as pronounced.

All of the modified free versions went up. The most modest increase was Koi Free at only 15%, and the most substantial was Thunderstorm Free with a startling 268% rise.  Galactic Core similarly had a dramatic 104% increase.  I initially assumed Thunderstorm's performance had to be something else -- maybe we'd been featured and I hadn't noticed, or something. Surprisingly no, apparently it's huge in Mexico and very few people there were finding it previously. 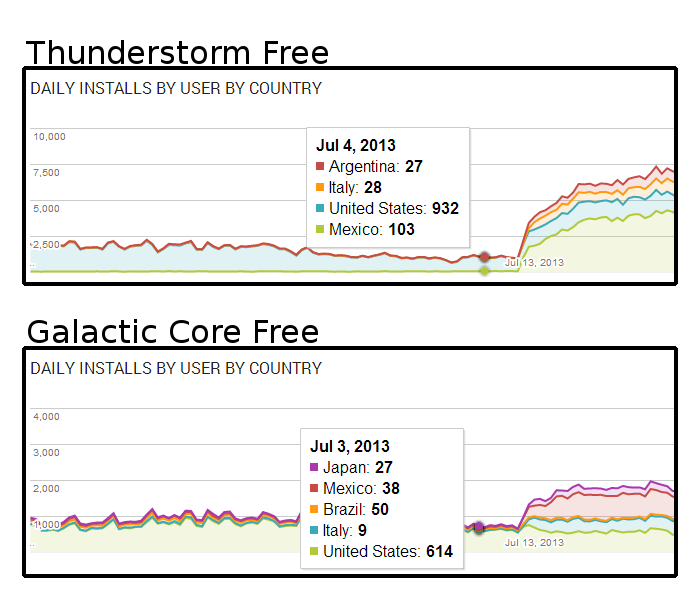 The chart to the right is clipped from Play's statistics page.  It's a pretty good visualizer of an unattended market being reached for the first time, and honestly is pretty inspiring from the stand point of justifying the investment.

That said, the paid versions didn't get nearly the dramatic shift.  They still gained overall, but the biggest winner was Koi easily -- interesting considering the free version didn't shift very much. Koi's paid version gained 42.7%, a lot of which seems to have come from Japan based on the breakdown for that period. Others went down, though, so the overall paid version growth wasn't large.  Still, the average DID go up, which is notably better than our control group did.

The more recent update was for the in-app strings themselves.  Paid and free versions of all five products were updated on April 3rd, 2014.  Notably this includes the text in the upsell window that was mentioned earlier, beyond that most of the text is things like the title of the product and strings on the settings screen. At this point, the Play descriptions had been localized for several months. 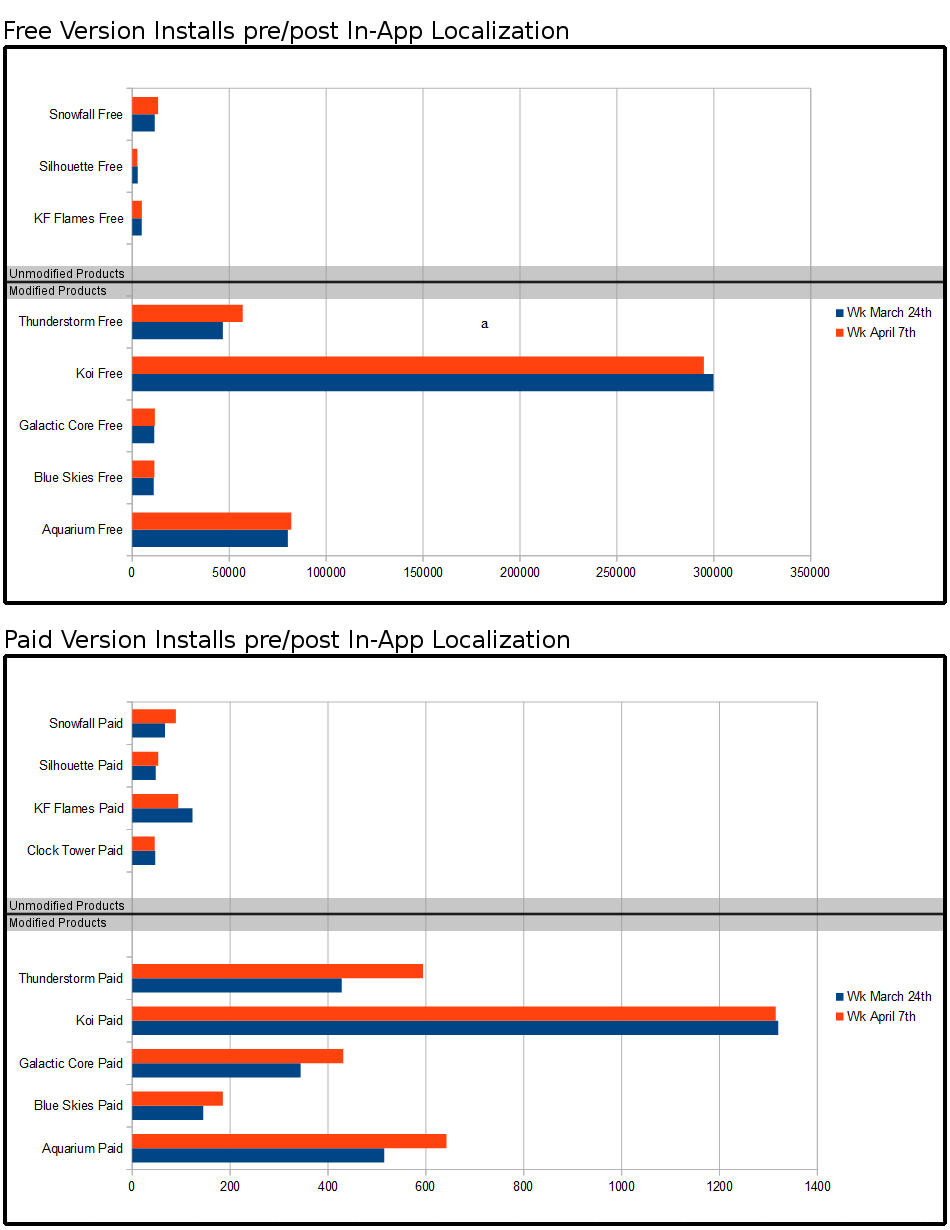 This time the results were basically flopped. The free versions didn't show any great gains, but the paid versions grew nicely. Again, Koi was an anomaly, actually losing a few percent after the translations. Everything else got a nice double-digit boost, with Galactic Core being the strongest at a substantial 54.3%.

That said, the market for the control group drifted upwards too, so the overall gain wasn't quite that dramatic assuming it works as an indicator.  Every category this time had an overall upward trend.

The actual update week itself had a pretty significant spike when the updates occurred, which is typical whenever we update the free versions -- the app updating presumably reminds people there's a paid version they could be using. The middling change to the free version downloads here makes sense, since as mentioned these products don't have a lot of language barrier to begin with, and without access to the settings there's not much to even see aside from the name.

However, the week-after results here suggest to me that we actually drive a reasonable amount of traffic from free to paid via that "Get the Full Version" button.

Not a whole lot to say really, aside from the fact that we really should've done this a while ago.  Looking at this math it seems likely it will pay for the time and expense easily given a little time, and if these were applications more dependant on language I'd imagine the results would be amplified.