We've been continuing to iterate on Anode, and it definitely feels like we're approaching the finish line.  Various gameplay and presentation tweaks are getting done but they're getting progressively more niche. 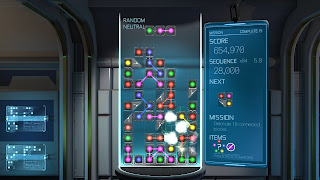 Fun stuff that happened over the last few days:

- Particle effect for hovering blocks!
- Handicap rows now use a pre-defined arrangement that is WAY more handicapping.
- Explosions distort the background.  We're a modern game now!
- Mouse cursor gets out of your way if you're not using the mouse!
- Messages about your multiplier don't stomp over more important game-status stuff.
- You can now set the antialising level separate from the overall detail level.
- You can now be warned about up to 28 incoming blocks!
- Tilty panels!  Snazzier!

And so on, things have been busy.  The game plays and runs well and things are looking good to have it up for download in a few days!
Posted by Jeremy Statz at 2:31 AM No comments:

We've been continuing to polish things and have smoothed out a lot of minor wrinkles and added plenty of small details to make things feel better and more understandable.  A trip to an indie game get together taught some good lessons and we've been sending out beta keys to get gameplay feedback from players.  I'm excited to get this published and out there, as it's a great title that's fun to play!
Posted by Jeremy Statz at 1:29 PM No comments:

Nobody makes these anymore.  I'm not sure why, but we have a lot of fond memories of Puzzle Fighter and Columns, so wanted to throw our hat in that ring.  Allow me to introduce Anode!

We've been working on this for the last three months or so, starting with a very rough prototype and gradually progressing though more and more refinement.   Several single player modes and competitive multiplayer are supported, along with achievements, online leaderboards, and plenty more.

Anode incorporates concepts from a number of other games, and introduces some of its own.  Colors can match diagonally or laterally, and don't go off until touched by a detonator -- something you have control of.  Set up chain reactions that can pay off later, or keep your bin clear, whatever works best for you.  Earn items to help clear the bin, stop your blocks from falling, or to punish your competitors!

Speaking of competitors, local multiplayer is fast and fun, with full support for either keyboard play, or a pair of gamepads, or whatever combination you like.  Break more than two blocks in a single sequence and any additionals get sent to your opponent's bin!  Work fast, and try to be the last man standing.  Set starting handicaps per player if things seem imbalanced.

We've implemented over thirty achievements, and have a variety of leaderboards covering all the game modes, including play with or without items.  All this is up and working now, with just some final polishing items holding things up.  Anode will be available on Steam in the next couple of weeks.

Just set up an IndieDB page too, check it out for a couple more screenshots!
Posted by Jeremy Statz at 9:08 PM No comments:

Still sort of settling on a name, but I was taking screenshots of a project we've been working on, and this one was pretty snazzy. 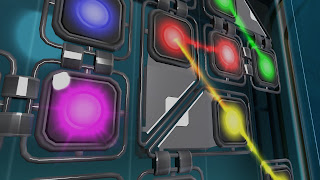 Posted by Jeremy Statz at 1:13 AM No comments:

This is a minor update that fixes a tiling issue with one of the sky images, and inherits a few minor updates to the underlying engine we use.
Posted by Jeremy Statz at 9:17 AM No comments: