After being pretty excited to have gotten a collection of watch faces out and working so quickly, of course an issue had to show up.  In this case we got some crash reports from folks about the Moto360 and the Sony SmartWatch3.  We were kind of surprised, honestly, since we'd been testing extensively on the various emulators and on a LG G Watch R and hadn't seen a single issue.

So, we acquired a Moto360 to test on, and lo and behold it did indeed crash.  After fiddling with bluetooth debugging for a bit, we finally got a working callstack.  So, what was the problem?

Well, we use OpenGL for all this stuff, and when you instantiate an OpenGL viewport you make some requests about color depth, whether you need a z-buffer, etc.  That's all well and good, but it was failing to return a valid viewport on the 360.  As it turns out, we request a 16-bit buffer by default, and the 360 only supports a 32-bit one.  That's something we've never seen from a chipset before.

Our code wasn't tolerant of this situation and since we've never had the problem, it had never really been an issue previously.  So, we made some changes, and now we handle it properly.  Hopefully that wraps things up across the various devices that were seeing a crash, and lets everybody run these with no problems.

This update allows you to design your own felt patterns!  Or, well, not pattern if you prefer -- there's nothing keeping you from picking a photograph or something either, but the image will mix with the felt texture and lighting so we make no promises about results.

Still, you can get some really nice results out of the proper image, like the example here on the right.  Hopefully folks enjoy!
Posted by Jeremy Statz at 11:58 AM No comments: 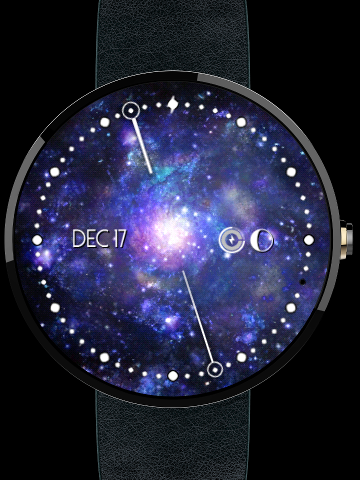 We just updated all five of the current watch faces to v1.1, primarily bringing along the ability to display battery remaining on the watch face.  You can see the design on the image to the right, and the functionality is pretty neat really.  It can display either the watch or the phone's battery, or both simultaneously -- in the image you see here the inside (darker) ring shows the phone's battery remaining, while the outer ring is the watch.  The circles erase themselves counter-clockwise as your battery ticks down.

This set of updates also handles some various cleanup tasks, doing things like hiding the compass prefs if the device doesn't support the necessary sensors, enabling mipmaps on the data readouts (compass, battery, moon phase) so they render a little smoother, and fixing a few small bugs.

This is a minor update that response to some user feedback for bigger buttons -- honestly, they were pretty small.  This significantly improves that, and also adds in a few links to the settings screen to view other products, etc.

And since it's no fair to do an update without adding something fun, there's a new mirror in the list as well!  It's called "Fairly chaotic", and is demonstrated in the picture to the right.  I've been trying to make a point of including pics in these posts -- if you're thinking I should do something more professionally lit and prepared, you're not wrong.
Posted by Jeremy Statz at 4:29 PM No comments:

We've been preparing for the release of the Watch Face SDK for Android Wear for a while, and were able to move fast when it was finally released.  As a result, we've created a collection of watch faces based on some of our most popular products, and are hoping folks enjoy them!

This was a fairly extensive undertaking that required a fair amount of infrastructure work, so we're offering these as separate products currently, and all are up on Play now.  They require your Wear device to be using Android 5.0 or better, which is currently rolling out to devices and should (theoretically!) be on everything over the next week or so.  Meanwhile folks can grab them if they want, or wait and see once the devices are ready. 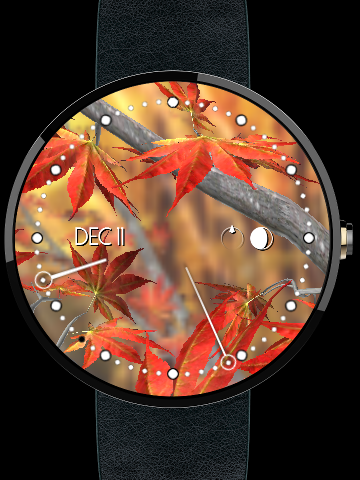 The approach we took to adapting our wallpapers was to build a collection of watch faces that can work over a variety of backgrounds, all of which fully support low power mode and other features of Wear.  The user can pick from these faces, enable features like whether there's a second hand, whether they see moon phase or a compass, and what font they prefer.  All the faces work on both square and round screens, with different tick mark art where viable.

This is all in addition to the scene underneath the watch face, which still preserves (nearly) all the same settings and configuration.  Visually they maintain all the same features and animation as well.  Our hope is that folks like this idea, and that we can add additional watch face styles to the list as time goes on.

We're really excited to hear if folks like the approach we've taken and would want more.

Posted by Jeremy Statz at 5:02 PM No comments:

Something people ask for a lot is a pirate version of our Flags wallpapers, and I'm happy to get this up there and available for anyone who's interested.

Like the other Flags products we've made it fully supports both landscape and portrait, and has as well animated flag moving in the wind overtop selectable backgrounds.  You can pick a custom image if you like and hoist your own design, or stick with the wide variety of built-in historical images.  Enjoy!

The default background is a Creative Commons image, created by Stuart Mckiggan!
Posted by Jeremy Statz at 2:18 PM No comments:

This doesn't sound like much, but this updates adds random bats that will fly through your clock tower.  That actually looks pretty sweet since the light rays and everything respond appropriately, so it's like being in a dramatic vampire movie.  Enjoy!
Posted by Jeremy Statz at 2:43 PM No comments: