This update inherits the various stability improvements mentioned in the previous couple posts, and in addition to that actually gains a major feature!  We made the art for this a while back, but things have been so busy it's taken a while to get it ready for the light of day.

The "Themes" drop-down in the settings menu allows you to switch between different visual styles, and by that I mean more different than you can do with just some color tweaks.  We've got three in place right now, and I'm attaching pics of the two new ones to this post.  One is a cloudy nebula sort of feel that doesn't have a distinct center, while the other is a heavily painted and saturated dark-colored galaxy.  Hope everyone digs it!
Posted by Jeremy Statz at 9:05 PM 5 comments:

Originally designed for tablets, Wavescape is an undulating terrain surface with light rays emitting out of it!  It's a pretty cool moving background that very much fits into the abstract background category, and honestly looks like a moving version of something you'd find in the wallpapers category on Deviant Art.  Hopefully folks dig it! 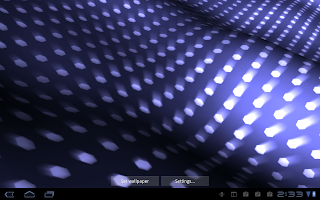 The rays are generated via a pixel shader and can have their length and intensity modified in the settings, along with all the colors and speeds of the movement.  We haven't done much with this sort of multi-pass rendering in a lot of our Market products, but meanwhile we've had quite a bit of contract work happening that's built up a lot of experience here.  We'll hopefully be taking more advantage of this in our own projects in the future.

In addition to this, look for a similarly abstract product showing up in the next week or two.
Posted by Jeremy Statz at 2:43 PM No comments:

We just moved over to the newest version of ADT (version 14), which substantially revises the way library projects are handled in Android.  The impetus behind the changes are a good thing -- package everything into a jar file instead of a shared source folder.  This should mean that in the future we'll be able to easily treat our library folders as a binary when we need to provide source to someone.

So far though, this is a bit bumpy.  The big thing is that we have a lot of UI work happening in our library projects.  Things like color pickers, display of color swatches, slider bar preferences, and so on are all shared between something like 50 different projects, and all of them are contained in a central library project.  Obviously this avoids a massive amount of code duplication.

The problem I'm finding is that every time one of these library-based UIs gets used, it fails as soon as I try to select an element by an ID.  I assume the ID isn't valid, maybe as a side-effect of IDs no longer being static?  Either way, something like this still compiles fine and nothing has changed with the layouts or anything:

Except that while previously main.setText worked fine, now main ends up being invalid.  I'd be surprised if they actually broke the ability to do this at all, so suspect I'm just missing something.

Update: Actually, this works fine.  Somehow or other in the process of messing with this, something in my library folder never actually got recompiled.  I'm confused about that since I did adjust the syntax a couple of times, but maybe since I didn't change any resources R.java was never recreated, and was now invalid?  Either way eventually I cleaned the project and now everything seems to behave properly.  Works for me.
Posted by Jeremy Statz at 9:31 PM No comments:

This should fix a couple of stability issues (see the Flags post below), and in addition you can now enable the "Toggle Lights" feature, which will turn the Pumpkins lights on and off when you tap them.  Simple but it's another bit of interactivity.  At the same time I adjusted the centroid of the touch detection so it's better centered on the pumpkins themselves.

There's a couple other art things in this update, but mostly it reduces a stripe down the side of the pumpkins that has been driving me crazy.
Posted by Jeremy Statz at 2:36 PM 1 comment:

This update was primarily to get EU Flags updated with a bunch of new flag art, but as NA shares the same codebase I updated it as well.

Basically, we've been doing some revisions of our underlying framework and believe we've solved a number of issues related to stability in the preview window.  Doing something like frantically clicking your keyboard in and out a couple dozen times shouldn't cause a crash anymore, for example.  Not exactly a common use case admittedly, but behavior that led to a crash there probably causes the occasional problem elsewhere.  So, we've finally sewn that up.

A couple of similar issues got dealt with at the same time, and so far as I can tell we've generally improved stability, so it's time to push this out into the world and see how things go.

Which flags got added?  A grab bag of user requests that have built up over the last couple months mostly.  Armenia, Bosnia/Herzegovina, Macedonia, Monaco, Montenegro, San Marino, Serbia, and Vatican City.
Posted by Jeremy Statz at 1:35 PM No comments:

This update contains seven new Koi types painted by the excellent Allyson Vaughn, based on real species.  It's also inheriting several general framework improvements that have occured over the last couple of weeks.  Enjoy!

Shooting for another update with some new background art before long!  :)
Posted by Jeremy Statz at 3:15 PM 3 comments:

This is something we've been asked for a few times, and as Jungle Waterfall hasn't had an update in a while it was time to give it an update with any framework fixes that have happened meanwhile.  This is still one of my favorite projects.  :)
Posted by Jeremy Statz at 11:10 PM No comments:

So, when I revised this to use OpenGL 2.0 I unfortunately made the lighting darker than previously, and folks really hated that.  This turns this back up to the previous levels, so the pumpkins are oranger and everything in general is more like it was before.

I also added a few new features, particularly in the form of touch interactions with the pumpkins and spiders.  Enjoy!
Posted by Jeremy Statz at 11:16 AM No comments:

Halloween hasn't had an update since last year, and ran pretty sluggishly on a tablet, so the goal of this revision is to remedy that.  I started out by moving it to OpenGL 2.0, re-implemented the lighting and other scene features, and shuffled the draw order more intelligently.  Once I had everything looking pretty much the same as before, I added animation smoothing to the ghosts and spiders, then rigged and animated all the trees in the scene.  I also tracked down the original texture artwork for the house and resampled it to a higher resolution.

All the opaque textures are now using ETC1 compression, so they're a sixth the size in memory than they originally were.

So, as a result, we now have more going on, at a higher resolution, but at a higher framerate and with less memory use.  That's pretty much a win all-around.  Enjoy!  :)
Posted by Jeremy Statz at 5:11 PM No comments: