Been working on this one the last couple weeks, and it's finally just about set.  This is an animated wallpaper showing a hanging flag blowing in the wind, with a bunch of customization options.  It includes flags of the United States, Canada, and all 50 US states.  There's seven backgrounds -- Five of places in North America, plus black and white.  You can select the state of the flag (solid pristine, translucent, or solid tattered) and the animation speed.  In landscape mode you get a more stylized angled close-up of the flag.  It's quite pretty!

Check out the YouTube video!  The wallpaper itself will go live tomorrow morning, and we're really excited about this one, the motion turned out really great and it's fun to watch! 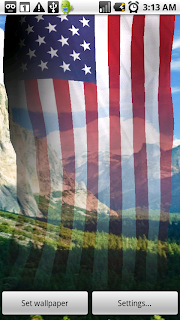 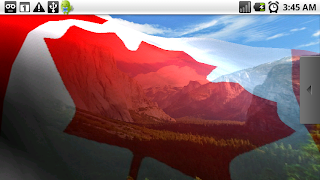 Things to get done on various projects:

I've seen some comments that the fish aren't active enough, so focused on improving this.  Fish will now change destination sometimes when swimming, they turn and move faster, and they have more drift when doing so.  In general the whole thing feels more lively, I think.

I also finally added a shark model, though I think he's a bit cartoony.  I'll see if I can get him a bit more in the photo-real direction everything else is next update.  When you feed the fish, the sharks get a steak instead of fish flakes.
Posted by Jeremy Statz at 11:06 PM 2 comments:

Fish have a new behavior!  When you tap on the screen, there's a chance (20% per fish) that they'll stop and look at the glass for a few seconds before continuing on.  This got a good reaction from test audiences  :P

Mipmapping is a rendering technique that reduces noise patterns in edge-on faces.  It also allows a texture to be rendered at a lower resolution when the higher-res version isn't needed.  It's generally a good thing both for framerate and rendering quality, and I had it enabled some time ago originally, but took it out when I discovered that some phones don't support OpenGL ES 1.1 style mipmap generation correctly... and there doesn't seem to be any way to tell the difference.  So, now it's re-enabled, and  if you have a problem it can be disabled on the customize screen.  Press menu and it's in the pop-up.

The implementation of the options pop-up itself should allow me to add in a few more options in the future, so it's useful having that groundwork out of the way.

There's a new prop available, it's a roman column sticking up out of the ground.  It seemed appropriate.

In response to feedback, the triggerfish is substantially larger and the clownfish a notch smaller.  This is a nod to their actual sizes in, you know, reality.
Posted by Jeremy Statz at 10:56 AM 5 comments:

I got a couple bug reports about this... basically, after the wallpaper's been running for a while (several days?) eventually the light streaks and clouds would become pixelated looking.  I haven't seen this on my Incredible, but my guess is that the scrolling values simply got very, very high after a while... so I'm now rounding them down periodically.  Hopefully that does the trick.
Posted by Jeremy Statz at 1:52 PM No comments:

This update is going to be something of a grab bag of changes.  Firstly, I'm re-enabling mipmapping by default, and have added an options menu to the customization screen that allows disabling it if there's problems.  This should give a bit of a performance boost but still allow problematic phones to disable it.

I've added a new fish behavior -- when you tap the screen there's a small chance the fish will stop and look at you for a few seconds before continuing on.

The overhead light got an improvement.  It now has three modes, the third of which is more active and better looking than the current 'on' does.  It's also a touch more expensive, so pick your favorite.

The clownfish were reduced in size a bit, and the triggerfish enlarged.
Posted by Jeremy Statz at 1:50 PM No comments:

I've got a bit of time to kill, so here's an explanation:


Running a forced-landscape application (The camera app, for example), then returning to the home screen, results in the camera being zoomed in too far.
When the OpenGL viewport is created, I'm handed a width and height by the operating system.  I divide the height by the width to calculate the ratio, which I then use to make sure field of view is correct on the in-engine camera.  Right after that I set a flag called IS_LANDSCAPE, which a few things here and there key off of (landscape requires less horizontal scrolling, for example, because the camera view is wider).  The place I set IS_LANDSCAPE looked like this:
if( screenRatio > 1.0 )
IS_LANDSCAPE = true;
So what's the problem?  Well, if you switch to a landscape desktop, IS_LANDSCAPE gets set to true.  Then, if you switch back to portrait... well, nothing happens then, because those two lines of code don't ever try to set it to false, so it stays set to true.  Yes, this was a totally stupid bug.  This now looks like so, which sets the value at all times:
IS_LANDSCAPE = (screenRatio > 1.0);

On some phones the far left and right edges of the city image end about a tenth of the way from the edge of the screen.
This one was a little more interesting, though it wasn't complicated.  Basically, the way home-screen switching works is that when you swipe from one to another, a function called onOffsetChanged gets called.  It gets passed a 0-1 value.  The idea is, if you're on your far-left home screen, it's 0, if you're on your far-right home screen it's 1, and in-between it's whatever percentage across that space you're at.  Pretty simple.
What I do with this is set a value within my wallpaper renderer called desiredCameraPos.  Every frame, the actual camera position attempts to drift towards desiredCameraPos with some acceleration, so you get smoothly interpolated movement no matter what the offset changes to.
The person who reported this bug was using stock android, a Nexus One.  I've been testing on an HTC Incredible, which uses HTC's modified home screen.  HTC's home screens already try to do smooth interpolated movement, so their background parallaxes with the foreground icons.  On top of that, when you're on the far right home screen and try to swipe right again, the camera actually pushes a little further then springs back, like it's on a rubber band.  What does this mean?  It means that on an HTC Sense phone, the far left and right screens aren't 0 and 1, they're more like 0.05 and 0.95.  This means that when I was testing, I didn't see a gap, because the camera never got all the way to the end of the possible range.
So anybody testing Live Wallpapers on a phone running HTC Sense:  keep in mind that it doesn't go all the way to the end when scrolling, and make sure you test by forcing the value to 0 or 1 and make sure things still work okay.

The funny thing is, we did test this on a Motorola Droid, which runs stock Android, and didn't notice the problem there, either.  Why?  I'm guessing because the Droid has a 480x852 screen instead of 480x800, so its camera view ends up being a bit more tall and skinny.  Probably just barely enough that you don't see the edge.
Posted by Jeremy Statz at 8:53 AM No comments: