Well, it'll perform better on any device, but the tablets are the main thing -- it runs about 10fps faster there, now.  Minor update but should help.  :)
Posted by Jeremy Statz at 11:53 AM No comments:

None of these are earth-shattering updates for most users, but you should find the framerate generally improved now.  It's always been fine on phones, but we were definitely suffering on devices like the Xoom and this updates shores that up quite a bit.  The phones getting a bit faster is a nice bonus.  :)

In addition, I noticed we really were seeing more garbage collection than we should be.  Investigating this, it comes down to updating our Calendar instance too often.  You see, the planets orbit based on the current time of day, and I had them checking every five seconds.  Each planet was doing its own update however, so the net result was a fair amount of calendar traffic.  What I'm doing now is having them all call to a central point, which updates its calendar every 2.5 seconds.  So we get updates twice as often with a fraction of the garbage being created.

Calendar updating is surprisingly expensive, and this isn't the first time it's caught me.
Posted by Jeremy Statz at 5:15 PM No comments:

I just updated this old post with additional .inf strings for the Xperia Play and the Galaxy Tab 10.1.  Have fun!
Posted by Jeremy Statz at 10:17 AM No comments:

This one's pretty much just what it sounds like.  I saw the teleport bug happen a bunch of times while showing out stuff at Google I/O, and don't know how I missed it before.  It shouldn't be an issue any longer.
Posted by Jeremy Statz at 11:02 AM 5 comments:

I noticed that in landscape mode sometimes you'd see a butterfly shadow 'pop' into view on the edges of the screen, that should be fixed now.  In addition I shuffled around the rendering order of a few things and gained an additional few fps on the Xoom -- mostly from rendering shadows after the butterfly instead of the other way around, though I'm doling out alpha test more carefully as well.
Posted by Jeremy Statz at 10:58 AM 1 comment:

This update should trim your memory usage a notch if you've switched backgrounds a few times -- it'll properly unload the old texture, something that got overlooked previously.  Sorry about that!

We've added a couple of new default backgrounds with this update to make up for it.  Pencil Sketch is surprisingly cool looking, and Icicle looks pretty sweet if you dial the number of faces low.  Enjoy!
Posted by Jeremy Statz at 8:32 PM No comments:

Lots of improvements here, actually.  Time of day now uses the same positional updating some of the others do, so sunrise/sunset should be accurate for your location!  In addition, things now render differently, so extremely high-res devices like the Xoom should see some improvement.  The bamboo itself now has more animation frames so it'll look smoother as well.

More smoothness for everybody, really.  Can you have too much?
Posted by Jeremy Statz at 3:29 PM 1 comment:

I'm genuinely unsure how it happened, but with the last update fish fins start flickering on the Xoom (and other Honeycomb tablets).  Very strange and didn't make much sense to me.  The fish fins were using alpha test to handle their transparency, which now I know to be very expensive on the Xoom, and I basically audited the entire scene to minimize its usage.  This got me a few fps back in addition to fixing the flickering, so I think we can all call this a big win.

I also switched the plants and anemones over to using premultiplied blending in the process, which helped fix the dark halo on some of them.

Sorry for the incremental update so soon after the last one.  I tested it, I swear, but apparently didn't check the Xoom at any point.  :/
Posted by Jeremy Statz at 1:48 PM No comments:

This update is primarily to clean up behavior on the Xoom and similar devices.  It disables alpha testing and increases the resolution of the background images, in addition to including some fixes to the custom image caching.  The behavior and appearance on the Xoom is much better as a result, and it runs better on the phones I tested as well.  Win/win!
Posted by Jeremy Statz at 11:03 AM No comments:

Pretty much what it sounds like, Aquarium is now using the cached image stuff some of the other updates introduced, so your custom background shouldn't disappear on a reboot or anything.
Posted by Jeremy Statz at 10:44 AM No comments:

This is a really minor maintenance update that I wanted to get out there before a ton of folks had downloaded it.  You can now move the wallpaper to your SD card storage if you'd like.  :)
Posted by Jeremy Statz at 10:16 AM 2 comments:

This update primarily incorporates the updates to custom image handling that have occurred over the last week or so.  It should be very solid now with no more images taking a while to show up after a restart and so on.  Enjoy!
Posted by Jeremy Statz at 4:41 PM No comments: 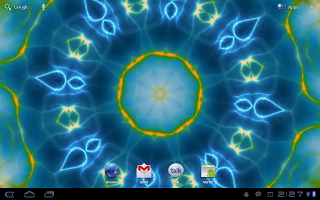 Just uploaded a new one a few minutes ago!  Basically, Prismatic works similarly to a traditional kaleidoscope, breaking up an image with a series of mirrored facets.  It's surprisingly hypnotic and beautiful to watch, and with the right settings actually works surprisingly well as a background.

There's a wealth of settings available here as well.  You can control how many facets the prism has, both radially and concentrically.  You can modify the default movement speeds of the image and can control how much it'll move with touch.  We've got over a dozen backgrounds included by default, but you can select your own custom images as well.  Plus there's controls for brightness, rotation speed, and more!

Several of the included images are based off of Creative Commons Attribution licenced work, and if you want to take advantage of the custom background feature you should check out the authors.  Patrick Hoesly was responsible for a few of them, and two came from WebTreats.

This one's very cool to watch, and I believe we've got a stronger effect than the similar stuff on the market.  Hope everyone likes it!
Posted by Jeremy Statz at 2:09 PM 1 comment: