One of our customers for Anode attempted to the run the game on their Gentoo Linux machine and found that it immediately crashed.  Unity did not provide a very helpful stack trace for us to dig into.

It took almost a week and a half of research, but we finally narrowed down what the problem was.  Our customer who discovered the problem was incredibly helpful during the process.

Suffice to say, when we built Anode using the most current version of Unity we had available (5.2.1f1, also tested more recently with 5.2.2f1 and 5.2.2p1) and had sound assets referenced in the scene file, the game would crash, but only if we ran on Gentoo Linux through the Steam client.  If we ran via the command line or a desktop shortcut, the game was fine.  We also confirmed this with a simple Unity project started from scratch.

One of the symptoms of this problem we noticed was during the Unity build process, where it would warn "Failed to add the asset file size for sharedassets0.resource".  If we referenced a sound asset, this warning would appear, and we'd get the crash on Gentoo.  If we removed the sound reference, the warning would not appear, and the game would not crash.  This is also happened when we tried to include sound assets in the Resources folder rather than a direct scene reference (though in that case the warning was "Failed to add the asset file size for resources.resource").

This Unity forum thread talks a lot about the warning, but in the end concludes that it's harmless, and in fact Patch 4 for Unity 5.2.1 suppresses the warning message during the build.  We had seen this warning earlier during the development of the game, but it did indeed seem harmless, since the game ran find on Windows, Mac, and Ubuntu Linux.  However, even with 5.2.1p4 suppressing the warning, we still found the same Gentoo crash with the builds it made.

We currently have an issue submitted to Unity about this, and will keep an eye on it.
Posted by Joel Burke at 9:32 PM No comments:

We just pushed live an update adding five new languages to Anode: German, Spanish, Russian, Japanese, and Korean.  These are the top selling languages with our other puzzle titles, and we're hoping those communities enjoy the game! 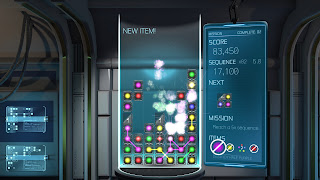 Posted by Jeremy Statz at 1:57 AM No comments:

This is a modest update increasing the resolution of some artwork, and making a few other small adjustments in the process.
Posted by Jeremy Statz at 12:50 AM No comments:

We ironed out the last of the issues over the weekend, and the game is now available on Steam!  Anode turned out to be a fun, polished product and we're hoping folks enjoy playing it.  We look forward to seeing what the leaderboards look like in a few days.  :)

Posted by Jeremy Statz at 6:07 PM No comments:

This is mostly a bug fix update, as some folks were getting shader compilation errors on their device.  I was surprised to discover the problem here -- the pixel shader was using a varying that was no present in the vertex shader.  I would have expected that to just blatantly break on any device, but apparently it's so tolerated that only some Galaxy Notes and things with the same chipset demonstrate the problem.

Beyond that a few minor improvements were added.  In particular the ghosts do a z-prepass now so they don't overlap themselves when rendering, which makes their arms cleaner.

Took a while, but we finally have a video suitable for the promo slot on Steam.  Check it out!

This was created working with the guys at TrailerSquad, who did a great job.  A game like this is a difficult subject since it's all about the gameplay mechanics, without much in the way of background motion.  I feel like this gets across the often-frantic fun that comes with this type of game, and even explains the mechanics a bit in the process, but keeps plenty of motion at the same time.
Posted by Jeremy Statz at 4:01 PM No comments: