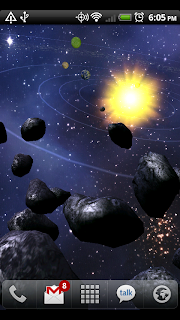 Been working on this one on and off the last couple weeks, and finally have it to a point where I like it.  For a change not a lot of tech development happened with this one, it was mostly a matter of tackling the art and scene setup, and I'm happy with how all that turned out.

There's a few dozen asteroids in the foreground that tumble from one side of the screen to another, with the rest of the solar system in the background.  The orbits of the planets in the system are tied into time of day, with the slowest (the green gas giant) orbiting once every six hours.  The rest of them are at 3, 2, and 1 hour intervals.

The original scene didn't have the planetary orbits outlines, and it felt rather empty, and was hard to understand where the planets are were relative to each other (since they're all different sizes).  Adding the rings helped that a lot and means you get to see some shift when switching home screens.

The sun is a couple of layers of alpha, rotating at different speets, multitextured together, with a color gradiant overtop.  The result in a subtle but attractive animation, I think.

This is the first wallpaper that's really leaned heavily on OpenGL's lighting for effect, I think, and it didn't turn out badly.  I'm actually quite happy with the asteroids -- they're two passes, the first diffuse lighting and the second specular lighting.  They've got a good cold shiny look that feels very appropriate, I think.  They're also dark enough that they don't distract as a background.

All told I'm quite happy with how things shaped up.  It still needs a few more user options, I think, but I haven't worked out exactly what those should be yet... they'll happen in future updates.  Any thoughts as to what those should be, I'm all ears.
Posted by Jeremy Statz at 12:01 PM