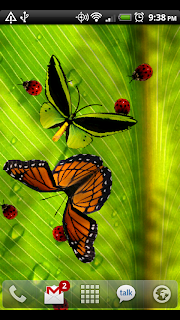 Ladybugs has long been the least popular of our live wallpapers, and let's face it: the lack of butterflies is why.  So, taking action on that observation, it now has a whole mess of butterflies (six different types) and if you set the population to "Invasion" you get swarms of them!

This, of course, means "Ladybugs Live Wallpaper" is now a bit of a misnomer, so after a few attempts that kept bumping into the 30 character limit, we're going with "Friendly Bugs Live Wallpaper" for the new name.  It's descriptive, it's totally friendly, and it's got a vaguely Japanese anime vibe that we like.

The butterfly models and textures are the work of Allyson Kates, who did damn well for just a few hours!  Getting the landing and taking off to feel right took a bit of time, but overall I'm happy with the result, and it'll probably get a bit of tweaking in future updates.  Summoning a butterfly when you tap the screen might make sense too. :)
Posted by Jeremy Statz at 8:49 PM