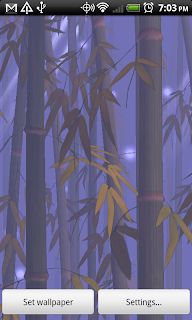 In the mood for something a bit zen?  Bamboo Forest is a serene scene of waving bamboo trees with shafts of light from above.  It's got a mess of color preferences for fog and light, along with settings for fog density and camera speed, and controls for enabling/disabling the particles and light rays if you don't like them.

There's a surprising amount of complexity to this scene, and a lot of time went into making it perform well with that many object visible and at that detail level.  It works well and is quite pretty! 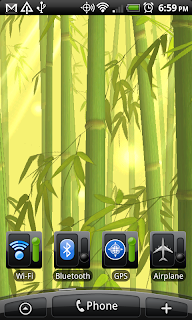 A lot of useful functionality came out of this one, development-wise.  The export tools can finally handle multiple animated objects being exported in one file, for one thing.  Originally, the scene had somewhere in the neighborhood of 100 separate animated models at a time, and that was just too much for the phone to handle.  Some of these got thinned, while others got combined to reduce the total object count.

There's also a basic visibility system in place that avoids updating and rendering objects that are off-camera.  That doesn't sound like much, but none of the other wallpapers so far have really justified writing something like that, as generally they're floating around 5-15 objects at a time.  These features combined with a lot of profiling and optimizations should help make future projects go quicker and smoother, as a bonus.
Posted by Jeremy Statz at 6:04 PM